May 16, 2016 - Muskegon, MI, USA - 140 Melges 24 sailors, from as far away as Wisconsin, Illinois, Georgia, and Canada met in Muskegon, Michigan last weekend to battle for the Midwest One-Design Spring Championship. Muskegon Yacht Club is known for having an excellent race committee, good breeze, great drinks, and amazing food. Everything was delivered in epic fashion.

The annual regatta participation has grown by over 40% this year, and this year twenty-eight boats came out to the starting line to kick off the USMCA Midwest Region’s season, despite really big winds and some frostbiting sailing temperatures. This is a sure sign that MYC Fleet Captain and regatta chairman Josh Wallace put on a great regatta and that Melges 24 racing is back on the upswing in the USA.

The party started on Friday evening, with MYC serving beer and tasty brats to the sailors straight off the grill as they arrived and set up their boats. It was tough getting boat work done with the party tent and grill a stone’s throw from your boat. Not too many fleets can combine dinner and drinks with boat setup, but that shows the Corinthian spirit that the midwest is all about.

Saturday morning sailors were met with a grim forecast. Rain, 25-30 knots of breeze, and cold temperatures could not keep the M24 fleet at the dock. Everyone was clearly ready to go sailing as they scurried to grab extra coats, hats, and gloves from their cars and tighten up their rigs as the whitecaps blew off out on Muskegon Lake. 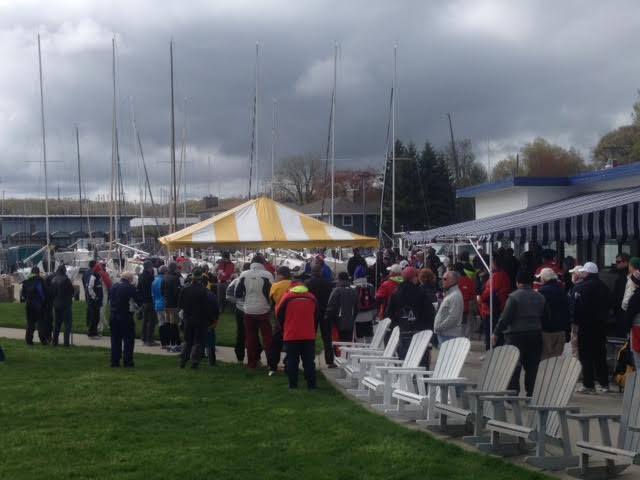 Perennial top Midwest team High Voltage, lead by August Hernandez took the win in race one, showing they were stoked and ready for the conditions. USMCA President Steve Boho on The 300 came out swinging in race two, with a big lead at the windward mark which he held to the finish. To mix things up a bit Megan Ratliff’s team on Decorum, Charleston Race Week Corinthian champions, rocketed downwind on their way to a win in race three.

Clearly things were shaking up to be a hard fought battle at the top of the fleet. Roger Counihan and his Jaws team were not about to be left off the list of those that earned bullets. His team pulled off three straight second place race finishes, and Jaws ate everyone up with a bullet in race 4 to put them in the top spot at the end of day one. Long time class member Marty Jensen piloting Zig-Zag proved consistency was key in the puffy and shifty conditions Saturday by managing to grab third place at the end of day one with no first place finishes.

After four solid races the tired, cold, and wet crews were excited to be heading back to the docks for a little R&R. The bar Saturday night was filled with stories of awesome wipeouts, great saves, and high speed planing downwind runs while stunning aerial photos of the race, taken by Brad and Matthew Fisher, played on the TV screens. Local MYC Fleet member Scotty Miller and his crew of Tramp Stamp fired up the huge grill which is conveniently placed right next to his Melges 24, luring anyone downwind to dinner with whitefish from the Fish Mongers wife. A full spread was provided as part of the entry fee complimentary of sponsors Wayne’s Deli, Ghezzi’s Market, and Latitudes Market. Let’s just say this, words can not describe just how good the food is in Muskegon.

Sailors were met with more cold temperatures and a little more sunshine on the morning of day two, as well as a promise of more modest breeze. Once again the wind machine of Muskegon delivered big breeze allowing for full planning conditions all day. The race committee had three races planned for the day.

Once again, High Voltage came out of the gate in the top spot, taking the win in race one. The 300 was back up front next, taking yet another bullet in race two. The close racing was setting the stage for a great battle in the last race between the top five boats, and the always cunning Mike Dow on Flying Toaster was ready to challenge for a podium position. The final race had Jaws up by one point over High Voltage as Petey Crawford, professional sailing videographer, showed up to do some live race broadcasting on Facebook and promotion for 2016 Worlds in Miami. 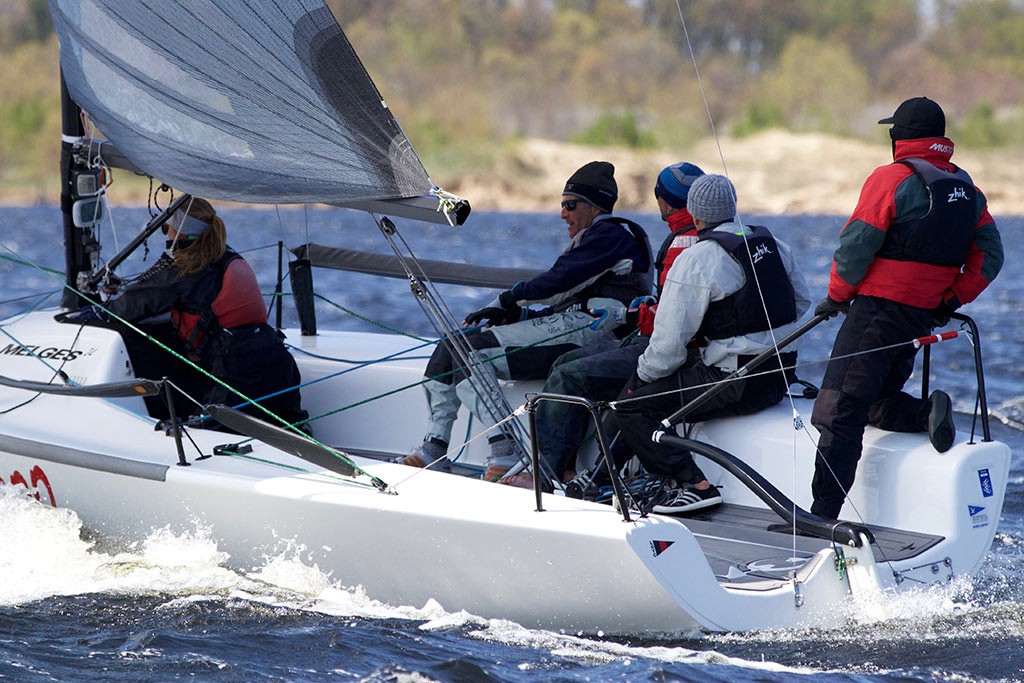 There was also a big battle setting up in the middle of the pack. The Canadians, northern Michigan teams and Muskegon locals, including The Djinn, I’m with stupid, RUMbunctious, Trump’s Hairdresser eh, Byrr, and Surprise were not about to to let the Detroit teams Hoodlum Racing and Gnarly Ruca into the top 10 without a fight as just a few points separated the top 15 boats in the fleet.

The wind in Muskegon also decided it wanted to be in on the battle royal as well, with gusts exceeding 30 knots as the boats lined up for the final start. Decorum managed to win the final race of the day by a good margin, but it was just a little too late to take home a podium spot. 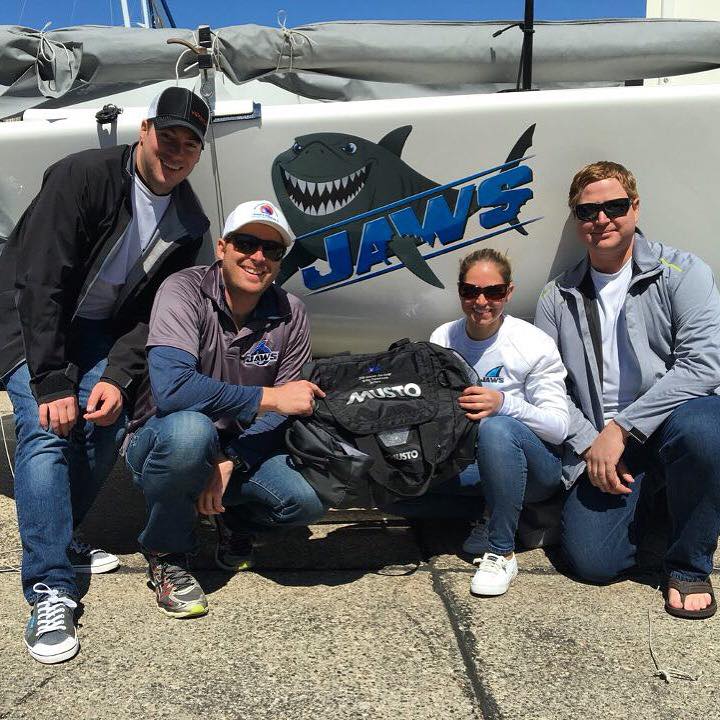 The story of the day was Roger Counihan’s Jaws team (Todd Wilson, Tiffany Wilson, Travis Maier), who ironically just purchased USA 775 from Muskegon (ex Mojo) and brought it down south to Lake Lanier earlier this spring. An impressing homecoming for the boat. High Voltage raced well for a second place finish, and Flying Toaster snuck into third place with no individual race wins, proving that in big breeze being persistent and steady pays off.

A big thanks to all of the racers that made this regatta happen. Any Melges 24 sailor that wasn’t here really missed the boat. But don’t worry, there is more awesome Midwest action coming up fast in Detroit (June 3-5) and Cleveland (June 17-19). Make sure to be there as part of the Midwest Summer Championship Series to race for the Overall Midwest Championship, Boat of the Year, Best New Team, and Best Team with Hull #200 or below. So stop in the Midwest and say hello on your way to the 2016 Melges 24 World Championships.

Want to learn more about the Melges 24 class and racing action in the US, sign up for the e-mail newsletter here: US Melges 24 Class Newsletter Signup

Join the facebook group for more up to the minute Midwest Action: https://www.facebook.com/groups/m24midwest