The UK Melges 24 Association have resurrected the UK National Championships after an absence of 4 years now that there is a growing fleet establishing itself on the river Orwell in Suffolk. Day 2 dawned with blue skies and a gentler Northerly breeze which reached a good force 3 throughout he first race of the day but gradually became less stable throughout the day, slowly tracking around towards the West as the day progressed.

Four races were scheduled for today and competitors arrived at the starting area in good spirits, perhaps in part as a result of the previous evenings hospitality including beer and Gin courtesy of Suffolk brewery Adnams.

The first race saw the familiar pattern of Miles Quinton's "Gill Race Team" helmed by Rob Larke leading around the first mark followed by "Why Knot" (Ben Stone) and the Tom Branton's S & M helmed by Stephen Videlo. These leading positions remained unchanged all the way through to the finish.

After a short lunch break, the third race got under way in an increasingly unstable breeze. "S & M" led at the windward mark from "Gill Race Team" and "Conspiracy" helmed by Josh Major. "Gelikt" helmed by Carlo Vroon had overhauled Conspiracy by the leeward mark but the leading two boats extended their lead in the shifting conditions with "Team Race Gill" managing to hold off the challenge from "S & M".

For the final race of the day, the race team set a slightly shorter course with an upwind finish in view of the conditions. "S & M" clearly enjoying the conditions again led at the first mark from "Why Knot" and "Gill Race Team". On the second beat "Gill Race Team" were first to tack onto Starboard after the leeward mark and within a couple of hundred metres had spotted a favourable patch of wind and jumped into a clear lead.

The same three boats went down the final run together and became preoccupied with each outer as they went hard left up the final beat. The remainder of the fleet took a more central path lead by "Gelikt" who managed to get just ahead of "Gill Race Team" to take the race win by less than a length, with "S & M" third and "Why Knot" just holding off two other fast approaching boats from the left of the course to finish fourth.

The evening's entertainment was a Pimm's Party hosted by event sponsor OneSails who had laid on perfect weather for such a party.

The event finishes tomorrow when three races are scheduled. Whilst the likely winner may be clear to all, the race for second place looks to be a tight affair, so there is much to look forward to. 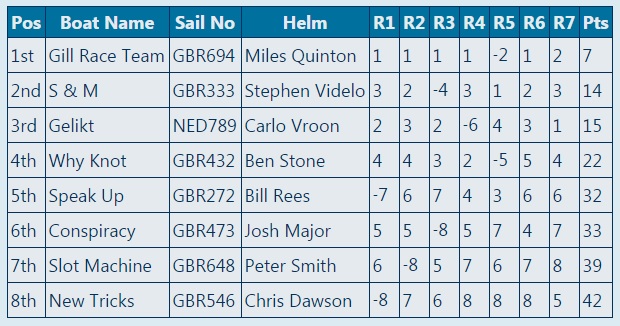